Sam originally got in touch with us back in Sept last year offering to make us soup, but our event dates kept clashing. Finally the stars lines up and he was able to join us at our last event at Community Base in February – and he brought along a delicious Tuscan Bean Soup that was very popular. Currently volunteering for The Real Junk Food Project Brighton and raising his lovely daughter, we wanted to know more about the mysterious crime analyst/TV food chef… 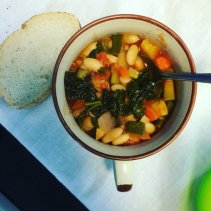 Like many of our chefs, you moved to Brighton relatively recently.

I moved here with my wife and daughter 3 years ago from Cheltenham. Before that we were in London for 16 years. Who wouldn’t move here? For someone who loves food and drink, Brighton is phenomenal with so many restaurants to choose from. I’ll eat anything but mustard, gin or coffee.

Mustard I get, but gin and coffee? When you say you will eat anything….?

I’ve eaten but maybe not enjoyed scorpions and crickets.

Uh, nice. So, how did you get into cooking?

My mum taught me to cook when I was younger and though I’m not professionally trained,  I started out working in Terence Conrans’ delicatessen in London and the ethos there was to be proficient in every aspect of the deli, which included food preparation. My career took a big shift into working as a crime analyst in London for nearly 10 years but food has always been my main love. When we moved to Cheltenham, I had more time to focus on food, setting up pop food events.

I heard a rumour you had a foray into TV? Tell me more…..

Working in Conrans’ deli fired up my love for food and I started experimenting with recipes and I think it gave me the confidence to apply for MasterChef. I was on MasterChef in 1999 when Lloyd Grossman presented the show. It was a great experience and 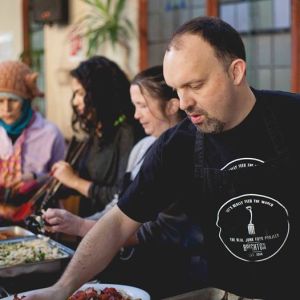 a very different format to how it is now. I must have caught the competition bug because I put my trifle on Britain’s Best Dish a few years later! Co-incidentally, there was a film production company opposite the deli I worked at and they asked me to play ‘Sam the Grocer’ on a kids TV cookery program called Food Factory.

Crime, food and showbiz – brilliant! How did you get involved with Brighton Soup?

I started volunteering with the The Real Junk Food Project Brighton a while ago, and we linked up through food community projects and I also do other charity events. I do a pop up restaurant once a year to raise money for a brilliant charity called Winston’s Wish, the charity for bereaved children

Just like Brighton Soup, food, family and community seem to be a central theme in your life.

I’d agree with that. When my daughter was born, I made a book from all of the recipes I’d collected over the years and which are important to me and I’ve often returned to them for inspiration.  It was this sense of community and family that really struck a chord with me when I came to the event in February. It’s really family orientated and warm and actually quite emotional. It is about a community coming together with food, ready to listen to great ideas to make that community better.

Sam will be putting on another of his great pop up events in the near future and we’ll keep you posted so you can go along.

In the meantime, if you want to taste what Sam’s cooking up for our next event then join us @ The Crypt on the 29th April. And if that isn’t enough of a contribution he’s also put in a fantastic prize for our raffle. Sam will come to your house with a bottle of wine and cook dinner for 4 people – and you get to choose the style (French, Italian, Mexican, etc). Raffle tickets are a £1. 🙂

Not long now, don’t forget to get a ticket.

This site uses Akismet to reduce spam. Learn how your comment data is processed.

Project Applications Open 🎉
We are super chuffed to be Radio Reverb's CHARITY OF THE YEAR 2022!
My Tweets