At the last Soup night at St. Luke’s, I got chatting with Nicola who’s one of our soup regulars. I discovered that she’s now a public face of Action of Elder Abuse, having a photo of herself as part of Rejuvenation, a photography exhibition at Brighton Station. I went to find out more.

Tell me a bit about yourself. I can hear the accent.

I live in Kemptown now but I’m actually from Manchester. I left there when I was 16, then I went travel and work around the world before settling down in Brighton. I’ve done all kinds of works. I’ve even been on the stage at the Theatre Royal!

That must have been quite an amazing experience! How did you come across BrightonSoup?

A couple years ago, I’ve seen an advert in the newsagent’s window. It said “Do you like soup? Do you like people? Well, come to Brighton Soup!” And I like trying lots of different things. I thought I would just come see what it’s about. I’ve been to at least 6 BrightonSoups since. Each time I’ve brought loads of people with me. It’s cheap. it’s a great night out.

And The raffle prizes are worth going for alone!

Didn’t your friend win a raffle prize from one of our regular chefs – a private dining experience?

Yes she did! The chef was Sam Redfern, who turned up and served 5 of us three courses dinner. We explained to him that we only had a tiny kitchen. So he said he would cook it at home and bring it to the house. He brought it all in tupperware,. Then he came to collect it after we finished. It was such a fantastic prize!

What prompted you to get involved with the Elder Abuse Recovery Service (EARS)?

I went to BrightonSoup one night and this lady was doing a wonderful pitch. It was for a charity that was developing and piloting in Brighton. I wanted to find a charity that I could, hopefully make a difference and help it grow. Also I was drawn to a charity that helps the older generation. I think the elderly are amazing, but they’re brushed aside.

What’s your role there and how has the experience has been for you?

I’m a Befriender. I take someone who has been financially abused out. And I integrate them back into the society. I give up my time to reach out to people who live quite far out like Eastbourne. It isn’t one-sided. When I started, I didn’t realise how much I’d get out of it. It’s making me view things completely different.  I have gained so much by sourcing out places to take people to. Salvation Army has brilliant activities, even provides a pick-up service. It  has given me a font of a knowledge. And I has met some truly amazing people – there was an old lady who was blind. She was 80 and a rug maker!

You’re also involved with the Rejuvenation community project, how did that happen?

It is part of an Older People’s Festival. The poster at the station is about people who are over 50 and their volunteer work. I wanted to raise the publicity for EARS and their works. We desperately need more volunteers.

Before I let you go, can you describe BrightonSoup in 3 words?

Well big thank you to Nicola for taking the time to speak to us, and I have to say I’m completely in awe of how passionate and dedicated she is in her volunteering role.

If you want to find out more about the groups she’s involved with check out Action of Elder Abuse, their Elder Abuse Recovery Service (EARS). Or contact Gail Shanahan directly on 07508 823 975 or gailshanahan@elderabuse.org.uk. Gail is their Volunteer Co-ordinator and the lady doing the wonderful pitch that inspired Nicola to get involved.

As an aside, if you check our event post A Festive BrightonSoup @ Community Base from last December you’ll see Nicola and friends all dressed up for Christmas!

You can also see more about the Rejuvenation photography exhibition at Brighton Station.

That’s all for now. I hope you to see you at our next soup @ Community Base on Dec 8th. Hope you can make it.

If you came along to our soup @ St Luke’s last week, then you know we had a good night. It was our first time at St Luke’s and Reverend Martin Poole made us feel very welcome. It was a shame the building work delays meant we didn’t get to use the fancy new ramped entrance and disabled toilets, but that didn’t stop us enjoying  the space. We weren’t sure that was going to be the case earlier in the day though.

A few hours before doors open we had two of our pitchers cancel. We do get cancellations, which is why we have a reserve arrangement: a 5th pitcher stands by and if they don’t get to pitch on the night (everyone turns up), then they get a guaranteed spot next time. Sadly this time the reserve couldn’t make it either. WIth a couple of days notice we could have arranged something (as we have in the past) , but with only hours left we had no choice but to go ahead with just two.

We were worried that the limited selection would make it less enjoyable for the attendees, but we needn’t have. They still had two great projects to choose from and everything else was the same: the delicious and plentiful food, the buzz and clatter of eating and conversation, the super raffle prizes, the awesome musical entertainment and of course the delightful company. We think it went really well. So did you, judging by the feedback!

“I love how people connected in the room. We all shared one thing in common at the event; we turned up because we want something good to happen in our community. And it’s wonderfully uplifting!” 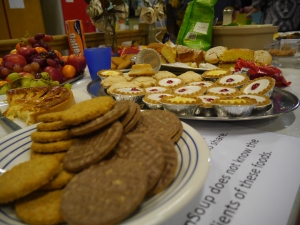 The positive community feel of how people can connect across this city happened before the doors opened. We had a call from the guys at Laing O’Rourke – the builders working up at the Royal Sussex – who had just finished a Macmillan coffee morningwith the NHS staff. They raised £700 – and could not eat another cake. Would we like them for our guests? How fantastic was that!

So a lot happened before we even started…

First up to pitch was Stephanie Lake pitching for the Brighton Women’s Centre who need computer equipment for their peer support drop-in groups. Then was Jon Bebb from Turning The Tide pitching for funds for their TREASURE project, to help take struggling families on uplifting weekend breaks. The one benefit to having two pitchers was they each got a little more time during the Q&A bit. 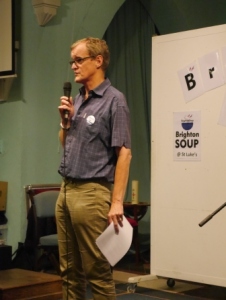 How many different ways can we thank the awesome chefs that give us our tasty selection? Once again Tom, Sam, Lizzie, Jo and our very own Martin delivered souper deliciousness. Tom couldnt make it (gigging in France again), but everyone else was there. Some of them may even have served you some soup – I hope you were on your best behaviour :). 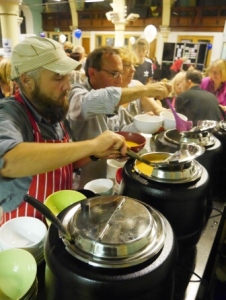 So feasted, it was time to close the voting and whilst we counted votes and door money we had our raffle and entertainment. So a huge thanks to all of our contributors for giving us some great prizes: everything from more food and drink, clothes and pampering, stuff for the kids and some fun days out including a ride on the Brighton Zipwire and the i360! A special thanks to Tracy from Tesco who also came along to help out! You can get full details of everyone here. Thanks to them and all of our guests we raised £197.30 to help cover our costs. Thank you very much.

So raffle out the way, one of the highlight of the evening had to be Shauna Pentony‘s performance, a mix of original songs and covers on guitar, all delivered with her angelic and soulfull voice. Despite losing her voice earlier in the day, she still went on and absolutely delivered. Her quiet heartfelt song about her sister “Call My Name” and the closing rendition of Valerie are faves of ours. You can watch video here in case you missed it or want to enjoy it  again.

So just before we announced the evenings winner we had a quick update from last soup’s winner, Jenny Skelton and her daughter Charlie. The first ever Disability Pride Brighton event went perfectly and to say thanks to BrightonSoupers for the funding they received. The money was used to hire a Changing Places toilet which enabled people with the most severe disabilities to attend. They didn’t want to exclude anyone and your funding ensured they didn’t. The toilet hiring company said they had one of the busiest days they had ever had, which is a testament to the inclusive nature of the event. 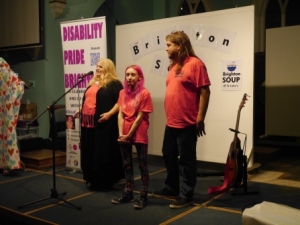 So, then it was time to annouce who soupers had voted for this evening. A lot of people had a difficult choice, but in the end it was Stephanie who won the funds for her the Brighton Women’s Centre drop in suite computers. We saw a lot of people talking to both our projects on the night so we’re hoping they all got some much needed support. As ever, we’ll keep you posted. 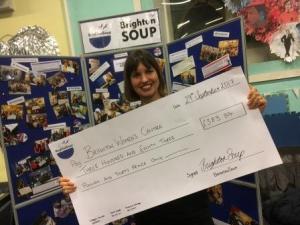 So then thank you’s and clean up time, and it went a treat this time. For the first time we closed the kitchen to hot food/drinks after the voting and it gave us more time to clean up and we got to leave early.

And the cakes from the hospital? They went down a treat, but we still didn’t finish them, all. So at the end of the evening we added them to our food that we donated to the Stopover Team @ Impact Initiatives. They were expecting soup, bread and maybe some biscuits – they got a lot of cakes too :).

“One of the many thing I love about soup is how people just talk to each other. Love that the tables seat eight so people will sit with others whom they have never met before, and make connections they otherwise wouldn’t”

You can check out the event photos. Or get the full details on the pitchers, chefs, musician and contributors that supported us at BrightonSoup @ St Luke’s 29th September 2017

We are passionate about the amazing projects making a positive impact on where we live. Tell the story of your project at Brighton Soup, and you could go home with £££ to help your project on its way. Be quick! Applications close at midnight!
What could you achieve in 4 minutes? boil a kettle? read an email? OR pitch your community idea to a lovely audience, maybe win the prize fund & definitely make useful connections & get great publicity. Its a no brainer. Deadline for applications closes on Friday.
My Tweets