Calling all bands, musicians and singer-songwriters!

As some of you know, BrightonSoup have a fortnightly radio show ‘Under the Influence‘ in partnership with the fantastic Mike Willis.

For Mike’s next show (on the 8th December) he’s going to be featuring some of the many many many talented creators of music that are just under the radar. Hurrah! So to take part please do the following;

This special show is called Under the Radar and will be live from 1-3pm on 1BrightonFM on Thursday December 8th.

*Disclaimer – there is very little chance Mike will get to play everything that’s sent to him. If you don’t get chosen, it doesn’t mean he think’s you suck! It just means he has limited time to fill and he also may start to identify a theme. Oohhh… Regardless, Mike promises to listen to every thing that he is sent.

Recently on BrightonSoup‘s radio show we had Charlie Savigar of Dare to be Charlie  on with our very own Mike Willis. Charlie is one of the brilliant artists we have had perform at a Soup event. So we took some time to chat to her…

So how did you first get involved with Brighton Soup?

Charlie: So it was just over a year ago; I had just moved into the area and we were looking for places to play and came across BrightonSoup and noticed they did live music at their events. So we contacted you guys and ask if you’d be interested in having us come down and they were more than happy. To be honest we didn’t really know anything about Soup prior to that so it was all a bit unknown but we really enjoyed it.

So “Dare to be Charlie” how did the name come about?

Charlie: Well its actually a mix of mine and my husbands first names (Daren Callow).

And what style of music would you say it is?

Charlie: I would say country rock with a bit of a pop folky edge; its quite eclectic really as I have a bit of a classical background and I’m massively into country and americano. Darens into his old school classics like The Police but also electronica like Depeche Mode. So its an interesting blend when we’re together.

So when you were at Soup what did you think of it, what struck you the most?

Charlie: Well the first thing that kind of hits you was that there was loads of people and it was a real kind of community vibe. I mean when we play we’re used to playing in places where people don’t necessarily listen and it doesn’t really bother us. Here; after the first song we thought to ourselves people are listening that’s really nice, after the second and third and people were still tuned in it was brilliant, haha such a novelty it felt fantastic. We really kind of connected to the audience; its such a unique concept as a public event one we’ve certainly never come across before. It was a really great night.

Do you think you’d come and play again?

Charlie: Well we did say we’d love to do it again but to be honest even just to come along and get involved as a bystander would be great.

Charlie, to round things off I have to ask this question, our readers must expect it by now, if you could be any soup what would you be?

Charlie: I feel like I want to say something exciting hah but you know what, my favourite is potato and leek, oh you know maybe I’ll say spicy chocolate with a dash of mint!

That’s almost a desert more than a soup!

Well thank you Charlie from Dare to be Charlie.

You can check out Charlie’s facebook page, hear some tracks and find out where she’s playing next.

And if you’re thinking of performing at BrightonSoup or simply just want to find out more, then head over to brightonsoup.org.uk; we’d love to see you there!

BrightonSoup is on the radio again tomorrow, for our fortnightly show Under The Influence in partnership with Mike Willis, so check it out, 1 – 3pm on 1BrightonFM.

That’s all from me this entry but have a great week everyone and don’t forget to stay hearty Brighton!

2 weeks to go and we’re all hyped at Soup HQ as we now have our 4 project pitchers confirmed! But we’ll be keeping that as a little surprise for you lot on the night.

Our chef’s are all lined up and ready to go, and will be making another selection of awesomely tasty soups for you. Tickets are going pretty quick as usual so if you haven’t got yours yet, get it now.

This months Soup entertainment will be coming from Birte Paulsen, sharing with you her ‘Indie Folk with a sigh of Nordic melancholy’. We love something a little different here, and she will definitely be delivering. Birte has just launched her new album so if you fancy a preview before the big night have a listen here.

“Borrowed Time is simply stunning…The album’s arrangements are impeccable throughout, while the playing remains elegantly energetic – never forced and never overdone…Her voice is like a beam of light that casts rays of melancholy interspersed with hope that make you want to listen to her music again and again… Birte Paulsen fills a musical niche to which few others can aspire, and she does so brilliantly!”

A big thanks to Laura Ward, one of our previous pitchers for getting Birte to play for us. Looking forward to seeing you all soon, take care, from everyone at Team Soup.

Rhythmix is a music, social welfare and education charity who believe in the power of music to transform peoples lives. Well back in April @ The Crypt event, Lucy Stone pitched for Rhythmix and although they didn’t win the pot of money on the night, they didn’t leave us empty handed. Here’s what Lucy wanted to tell us about the the experience:

“Everyone comes away from BrightonSoup smiling, happy to be part of a community that has supported a charity. But people naturally feel bad that they can’t give to all of the groups who come to Soup. 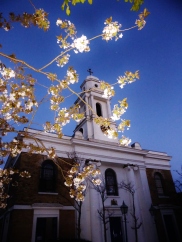 Well, we’re here to tell you that as a “losing” charity, we came away smiling from Soup too, even if we didn’t get the pot of money on the night.

We presented at BrightonSoup a few months back, with the aims of getting computers or money for tech in our office. As a charity, we work to transform the lives of vulnerable people through music. We make music with children in hospitals, older people with dementia and things like supporting young people who’ve been excluded from school in getting their first qualification.

But, as a grant funded charity, our funders don’t like us spending money on some of the basic things we need when we could be putting that money towards helping more people

make music. We do understand why, but this led to a dire state of our office equipment. We had outdated computers, screaming laptops and broken keyboards. It was impossible to work when our PC’s would crash 10 times a day, or there was no delete key on a keyboard. We may have been at the cutting edge of music education, but our office was stuck in the past.

At soup we asked for support for new technology.
But we got so much more!

Thank you to everyone who’s helped to transform our day-to-day lives and ability to support our transformational work.

One generous Souper bought us a brand-new laptop! This has been a massive asset, and means we can now be much more efficient. This is our favourite thing for skype meetings, now 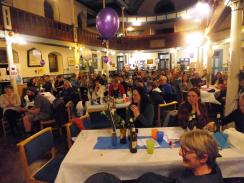 that we could replace the laptop that would screech if you moved the mouse pad whilst on skype.

Someone else gave us five used laptops that they no longer had use for. This has transformed our office, meaning there are now enough laptops per member of staff and we can work without any blue screens of death.

The great news is that the screeching laptop and other obsolete things went on to another charity. Jamies reuse and refurbish what they can and use them for training and volunteering opportunities for socially excluded adults.

And people also donated monitors! Combining these with the laptops means we now can have multi-screen set ups, working more efficiently than ever. This was incredibly generous and so helpful. Now we don’t hurt our eyes when we plan our sessions.

Ruby was also at BrightonSoup that night, supporting her mum whose project won the pot of money that night. Ruby decided to come volunteer for us, and has become an invaluable part of 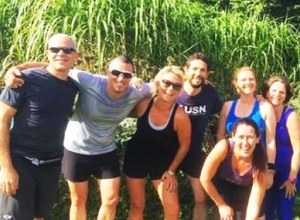 the team. She’s done everything from running our social media, fundraising, web design and more. Thank you to Ruby for coming to volunteer with us in the office.

In addition, when Matt and the team at Natural Balance asked the organisers of BrightonSoup about some projects he could fundraise for, Matt and his team chose to fundraise for us! Running 10 miles they raised over £1,000 for our dementia work: enough for four sessions. Thank you to Matt, Mark, James, Davide, Lisa, Seth, Nathalie, Natasha, Peter and Emily for running for us, and thank you to Soup organiser Will for putting Matt in touch with us.

From Matt’s fundraising, his friend Marcia has chosen to fundraise at her staged reading of Miss Everdene, based on Thomas Hardy’s Far from the Madding Crowd at Hove Methodist

Church at 7:30pm on the 25th of November. How much will this fundraise? We don’t know, but we know it’s money that without heading to Soup we wouldn’t have had before.

We’ve been humbled by seeing in action what can happen when a community comes together – they can do incredible things. An evening of soup and chatter led to us being faster, quicker, and better staffed because people reached out to us. This means we can help more people, and make a bigger difference in our community.

So, thank you to all Soupers and those who reached out to us. Next time you can’t vote for someone, know that maybe you have helped in another way just by being a part of the community.”

DEADLINE FOR APPLICATIONS IS TOMORROW. The application is short and easy. It won't take long. And its def worth it. Do it. https://buff.ly/3b595Uu
.Are you are looking for a small amount of funding to kick-start your community idea? Then apply to pitch at Virtual Brighton Soup in June. ONE WEEK until we close to applications (10th May) Follow the links in our bio and apply today.